“All the old paintings on the tombs, they do the sand dance don’t you know?

This morning –  Denial is not just a River in Egypt… From the banks of the River Nile: the best holiday ever, but what does it all mean… some thoughts after a week meandering through history.

Sometimes it’s necessary to pull one’s head out of the confustabalation of global markets and actually experience the “real” world instead. She-Who-Is-Mrs-Blain and I have been taking a week off to do something we never expected to find time for; we’ve gone on a proverbial personal journey up the river… Not just any river, but the river that arguably spawned civilisation, and thus our modern economy – The Nile. 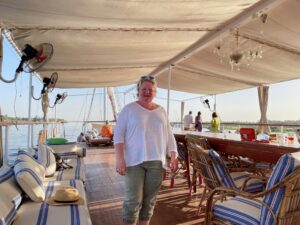 n recent months I’ve been financing an industrial infrastructure project in Egypt. I’ve spent time in Cairo, and found myself falling in love with the place. Which is curious – as a country it’s completely outside my usual comfort zones… It’s noisy, it’s chaotic, you can’t walk on the pavements (because Egyptians need somewhere to park their cars), and the driving is just plain scary… but when I think about it, I’ve been dreaming about Egypt most of my life.

My path was set on my 7th birthday when an aunt gave me The Big Book of Egypt as a present. Since then I’ve absorbed Anthony & Cleopatra (and the immortal Carry on Cleo), Alexander and Rome, the Arab Conquests, Nelson and the Battle of the Nile, and the Desert War. I’ve just spent the last 7 days visiting many of the sites and museums I still vividly remember from my childhood. Pyramids, Tombs, Quarries, Museums but mostly travelling slowly down the Nile on a Dehabiya – a small sailing boat. The views are simply stunning. The peace, the tranquillity and the wildlife – extraordinary! 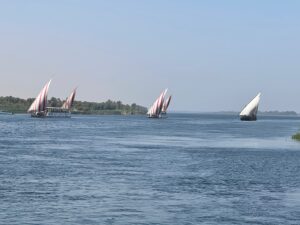 There are only 14 other passengers and they have proved firm and admirable companions. We’ve had a simply marvellous time getting to know each other – chatting late into each evening over wonderful dinners prepared by our crew of extremely friendly Egyptian rivermen. We’ve watched the horrible black-smoke-belching “luxury” Nile Cruisers pass us by – dismissing their passengers as mere tourists.

Very quickly you learn new things – like how the ancient Egyptian bureaucracy dominated the economy, and how the builders and craftsmen who built the temples, tombs and monuments knew they were on a good thing – slowing their work pace to ensure maximum payment for minimum work. They would do well in modern government.

Nicky and I began our trip in Cairo – catching the night sleeper train to Luxor. This is something you should do once, but ideally less. As train journey’s go it’s on par with British Rail – which is not meant to be a positive recommendation. (Planes are cheaper, faster and reliable.)  Unsurprisingly, for this is Egypt, we were late. We then spent a day visiting the Valley of the Kings (climbing in an out of tombs), the mind-blowing Queen Hapshetsut’s temple – where the walls celebrate peace, trade and prosperity rather than counting the hands and genitals of dead enemies to give a body count for a victorious Pharoah to brag about in the afterlife.

We saw the Colossi standing in the desert which inspired poet Percy Bysshe Shelly:

I met a traveller from an antique land,

Who said—“Two vast and trunkless legs of stone

Half sunk a shattered visage lies, whose frown,

And wrinkled lip, and sneer of cold command,

Tell that its sculptor well those passions read

Which yet survive, stamped on these lifeless things,

The hand that mocked them, and the heart that fed;

And on the pedestal, these words appear:

My name is Ozymandias, King of Kings;

Look on my Works, ye Mighty, and despair!

Nothing beside remains. Round the decay

Of that colossal Wreck, boundless and bare

The lone and level sands stretch far away.”

Of course, Shelly never actually saw the massive statues of kings, or read their then indecipherable hieroglyphs. But he caught the mood rather well.

Spending time in the tourist sites can be disconcerting – flocks of tourists being herded by guides. We had some excellent ones, but we also learnt to ignore guidebook advice. The first surprise about Egypt is just how friendly the people are – there is no menace. 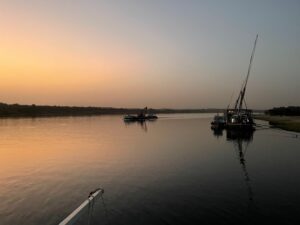 All the guidebooks warn about the hassle you are likely to find visiting sites. If there is one thing thing I would change it’s the vendors of tourist tat who throng every site. They are just trying to make a living – but they haven’t learnt the lesson to not aggressively bother potential customers. I wanted to buy a t-shirt, but it would have triggered a feeding frenzy…

In contrast, we found that engaging with the Egyptians working in the sites was the best possible thing to do – they show you more, help you get the best pictures and were delighted at the interest we would show. It’s no problem to reward them with a few notes for their trouble. Always carry lots of small denomination notes – everyone relies on tips to make up for tiny wages.

During our 5-day cruise down the Nile we visited villages, tombs and temples, the site of a 6000 year-old brewery, and a massive quarry where the building blocks of civilisation were hewn. It contains cartoons carved into the rocks by the workmen – reminding us of the human scale of Egypt.

It’s easy to be overwhelmed by dead kings and their mummies, but the funerial projects were probably work creation schemes to keep farmers employed during the summer season. The kings treated them well – one grave showed carvings of drinking, parties and dancing girls laid on for the workers.

The cruise was hardly the real world – but it was relaxing, beautiful and rewarding. And I got to speak to the rivermen and guides. I steered the boat and learnt how the sails worked. A perfect break. 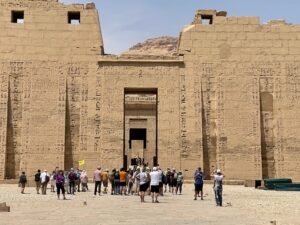 But, for all the fun, the beauty, and the millennia of history we’ve tasted this week – I do fear for Egypt. There is a definite sense of rebirth in the tourist sites and hotels as travellers return post-Covid. Everyone has bills to pay – which is why you don’t order a gin and tonic in a posh Cairo hotel – it will cost you thousands of EL. (The local beer is perfectly fine!)

In the days of the pharaoh, Egypt was self-sufficient and nurtured a rich population of maybe 2-3 million. It became the breadbasket of the Roman Empire – the most valuable province. It is now over 100 million and is expected to double in the next thirty years. A guide explained to me how Egypt now imports 70% of its wheat from Russia and the Ukraine – a dangerous inbalance. The Egyptian words for Life and Bread are the same – and the cost of flour has doubled. People are struggling.

The climate is changing – already cotton production in the upper Nile is proving vulnerable to higher temperatures. There is also the question of water security as new dams further up the river threaten the flow.

They need investment to create future security. Egypt recently devalued by 15%, but that will barely contain the mounting globally-induced inflationary pressures. Over the past few years the Government has embarked on significant and critical infrastructure development in communications, transport and utilities – but now they are under pressure to cut spending as the unravelling consequences of the Ukraine war threaten swathes of the emerging markets. If they stop spending unrest may rise. If they keep spending, financial crisis may result. Somewhere there is a balance.

Egypt is not a poor country – except in the monetary sense. Its rich in people and something less tangible; a sense of “us”. They are good people – just struggling to make a buck. I’m told by some investors I’ve shown my deal to “Egyptian political risk is too high”, which I simply don’t accept.

Whatever happens next, I’ve got to say the last 6 days on this Dehabiya, El Nil, have been extraordinary, affirming and fascinating. We’ve made new friend among the crew and our fellow travellers, and we are definitely going to do it again..

I anyone wants details of our cruise company – I’ll be delighted to share. A better investment than many of my other ideas!