This morning: The US just took another step towards the end of the Age of American Exceptionalism. It will have major consequences on markets and geopolitics. The West has limited time to prepare for some profound changes.

Thanks to everyone who sponsored the Walking With The Wounded/Shard Capital Team competing in the Round the Island Race. We came 17th in a fleet of 100 yachts, but that was mainly due to one silly error – we mis-hoisted the spinnaker (wrapping a halyard around the forestay), meaning we could not gybe, and had to let all our lines run completely free to drop it into the sea when we reached the Bembridge turning mark. Messy, very wet, and wasted us about 12 minutes to recover to sail from the ocean, and then a further 20 mins sailing slower than other boats as we re-rigged it all! But all done calmly without drama! We should have been top 10!

But none of that really matters. It was a fantastic day and great fun. 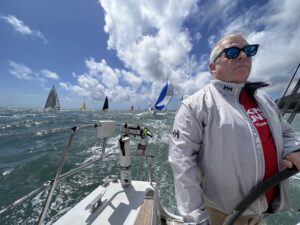 You can still contribute:  https://www.justgiving.com/fundraising/Bill-Blain1 if you care to support this deserving charity by making a donation.

Each morning I try to be objective about markets – using facts and numbers to show how they are likely to perform. Often, I have to be subjective – using the numbers to draw insights on what they foretell. But sometime, just occasionally, we get moments that are pivotal in the direction of history. One such moment just occurred. It markets a key turning point in the global picture and outlook.

According to polls 67% of American women are opposed to the US Supreme Court removing their right to own and control their own bodies. They will feel bitterly betrayed this morning. Abortion is an emotive subject – and will further deeply polarise the US. Who will the Supreme Court move on next? Same sex marriage? LGBTQ rights? Unravelling race equality acts?

The real issue is how the guardians of the US constitution, the Supreme Court, has become become deeply politicised – successively packed with conservatives who don’t reflect demographics or electoral trends.. It will take a generation to unwind. The republicans are delighted to flex and demonstrate their power, confirming it’s their agenda running the country… whatever the national vote said.

Therein lies the kernel of their own destruction. They really do believe in themselves – despite how bad it looks. I read one comment justifying the decision: “this will actually favour the republican vote because [catholic] Hispanic voters favour anti-abortion rules”, wrote a Republican man. MAGA will be achieved in the court room if the people reject it…

Its entirely up to America to decide what it wants for itself. We won’t tell them what to do, or how wrong they are.

The reality of the Supreme Court decision is the rock of American hegemony just crumbled a little more. The effect on the global economy will be substantial. It’s another sign of democracy dying, and the mythos of the American Age is fading. The reality is the US is being drained of the soft-power it once exerted; its attractiveness has waned. It’s splendour looks increasingly jaded. Civil rights, gun crime, drugs – you name it and the US looks weak. When we look towards the US we no longer see liberty, freedom and opportunity – but something more dark and increasingly authoritarian.

The world’s attitude to the US is changing. The West may be united on Ukraine, but global support is noticeably lacking. 35 nations abstained from voting against Russia at the UN. The Middle East and India see Ukraine as a European problem, and a crisis as much of America’s making. As the West lectures the Taliban on schooling girls, the Republican party move the US closer to a dystopian version of the Handmaid’s Tale of gender subjugation.

As the World increasingly rejects America, then America will reject the rest of the World. Time is limited. The Republican Administration, run by Trump, or kow-towing to him, will likely pull the US from Nato and isolate itself. That’s going to become increasingly clear over the next few years. The dollar, the primacy of Treasuries… will leave a massive hole at the centre of the global trading economy.

Really tough for Europe. As we seek alternative energy sources, what happens when Trump 2.1 proves as pernicious as Putin and shuts off supplies?

The supreme court decision was clearly timed to come at the Nadir of this US political cycle – a weak president likely to lose the mid-terms in November – when the Roe vs Wade news will be off the front pages. It means the damage to the Republicans in the Mid-Term Elections could be limited – they will still make the US essentially ungovernable from the next 3 years.

If the US was a corporate, it would be a massive fail on corporate governance. But its not. It’s the current dominant global economy and currency. It can’t be ignored.

In my time I’ve looked at how events can change history. Rome debasing its currency to pay the legions was one source of economic instability that ultimately led to the Dark Ages, or how dramatic wage inflation following the Black Death triggered migration to cities and the onset of the merchantile and industrial ages. The last 200 years has been the rise of the commercial age and all the attendant struggles as nations fought for economic supremacy.

What will replace America?

History is about moving forward. It doesn’t happen in a straight line. This year is a great example of what’s going to look a blip in markets in future history books. But I suspect it will be more famous as the year the ending of the US Age become apparent.

Halfway through through 2022 and its been interesting – in the Chinese sense of the word.. I still think it’s likely to get worse before it gets better. So many bubbles have popped, easy money is deflating, inflation is rampant, central banks are concerned and confused, and the world remains less stable and more difficult to understand.

Last week the market staged a wheezing recovery of sorts, but it doesn’t feel sustainable. It feels this market has more to digest. Many stocks still look overvalued, the inflation effects are not fully computed into price expectations, and the bond market hasn’t unravelled as much as I reckon it shall.

Yet, the upside is coming – it always is. The trick is to know when. This is what markets do. They get Euphoric. Then they Correct. This time it’s more painful than usual, because there is simply so much more to correct.

Basically, it’s business as normal them, overlaid with increasing geopolitical stress and doubt. Trying to predict what all the uncertainty means in terms of the risks of inflation/stagflation/recession on earnings, corporate balance sheets and just how central banks will/can react.

Politics.. dashed if I can be bothered reading anything about Boris Johnson anymore. Apparently, he’s planning to be in power for decades. Gone by Christmas one hopes. The EU talking big and doing whatever it takes to support Ukraine is positive – but let’s see how long the EU can deliver.

I’m told the big trade in distressed debt is Russia’s newly defaulted debt – in the expectation the EU will be forced to re-engage on Soviet energy. Long Russia, Long Italy? There’s a barbell made in hell…

Five Things To Read This Morning

BBerg – Russia Defaults on Foreign Debt for First Time Since 1918

BBerg – Britain’s Battered Economy is Sliding Towards a Breaking Point

Out of time, and back to the day job…